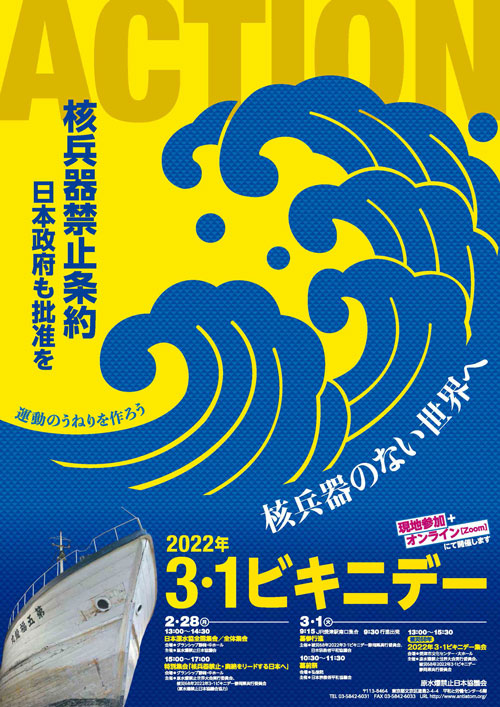 Achieving a world without nuclear weapons with the TPNW as leverage;

Japan should sign and ratify the TPNW without delay;

Exposing the damage of the atomic bombing, Bikini test and the Pacific and strengthening support & solidarity with the victims

Hosted by: Japan Council against A and H Bombs (Gensuikyo)

The National Conference will become a starting point of this year’s movement towards the First Meeting of State Parties to the Treaty on the Prohibition of Nuclear Weapons (TPNW), the NPT Review Conference and the World Conference against A and H Bombs in August. Through discussing and deepening the 2022 action plan, the participants will renew their determination to develop the nationwide movement focusing on the signature campaign and national mobilization for the Japanese government’s accession to the TPNW and the advance of the abolition of nuclear weapons. Given the re-surging of the pandemic, the entire program has moved online.

Greetings on behalf of the organizer: Representative Director, Gensuikyo

“With the TPNW as Leverage, Let Us Create a World without Nuclear Weapons”

We are encouraged by the news that Germany, major NATO members with US nuclear weapons deployed, decided to join the First Meeting of State Parties to the TPNW. Nuclear weapon states are driven into a corner, On the other hand, however, nuclear powers’ hegemonic rivalries are intensified as seen in US-China confrontation in Asia and the Ukraine crisis. Recently North Korea has conducted missile tests. With threats from North Korea and China being fueled, military buildup and strengthening of military alliance are promoted. Taking up what is happening in the world, we will discuss how we can achieve a nuclear-free peaceful Asia and world.

Part II: Panel Discussion: “For a Japan taking the lead in theprohibition and elimination of nuclear weapons”

*Presentations by the panelists will be followed by Q & A and chat comments.

Co-hosted by: Organizing Committee of the World Conference against A & H Bombs

Greetings on behalf of the Organizer: ISHIHARA Yosuke, President of Shizuoka A-Bomb Survivors

Ambassador Alexander Kmentt, Director of the Disarmament, Arms Control Proliferation Department , Austrian Ministry for European and International Affairs/Chair-designate of the First Meeting of States Parties to the TPNW

Presentation of Messages: Mayors of Hiroshima and Nagasaki, Governor of Shizuoka Prefecture,

President of Shizuoka University and others

Keynote Report: Organizing Committee of the World Conference against A and H Bombs

Japanese people have suffered from the US H-bomb test conducted at Bikini Atoll in the Marshall Islands in 1954. Following the damage and after-effects of the atomic bombings of Hiroshima and Nagasaki. The recent ruling on the “black rain” damage revealed that the A-bomb damage had been underestimated and many victims had been unattended without being admitted as the Hibakusha. They had to prove their damage by themselves and had filed lawsuits, but they have been turned down. Even nearly 77 years after the A-bombing, the real damage is not disclosed yet and the Hibakusha remain unattended. This situation itself is inhumane. In addition, the damage of Korean victims, who were forced to bring to Japan under its colonialism, have been neglected without full investigation, any relief measures and compensation. In spite of inflicting enormous damage to all over the world, the real damage of the Bikini test has been covered up and the Japanese and Marshallese victims have been abandoned without relief measures and compensation. By making clear these atrocious facts, this panel will reveal inhumanity of nuclear weapons and appeal that nuclear weapons must never be used again.

NOGUCHI Kunikazu, Co-Chair, Organizing Committee of the World Conference against A and H Bombs